One and a half meter monitor 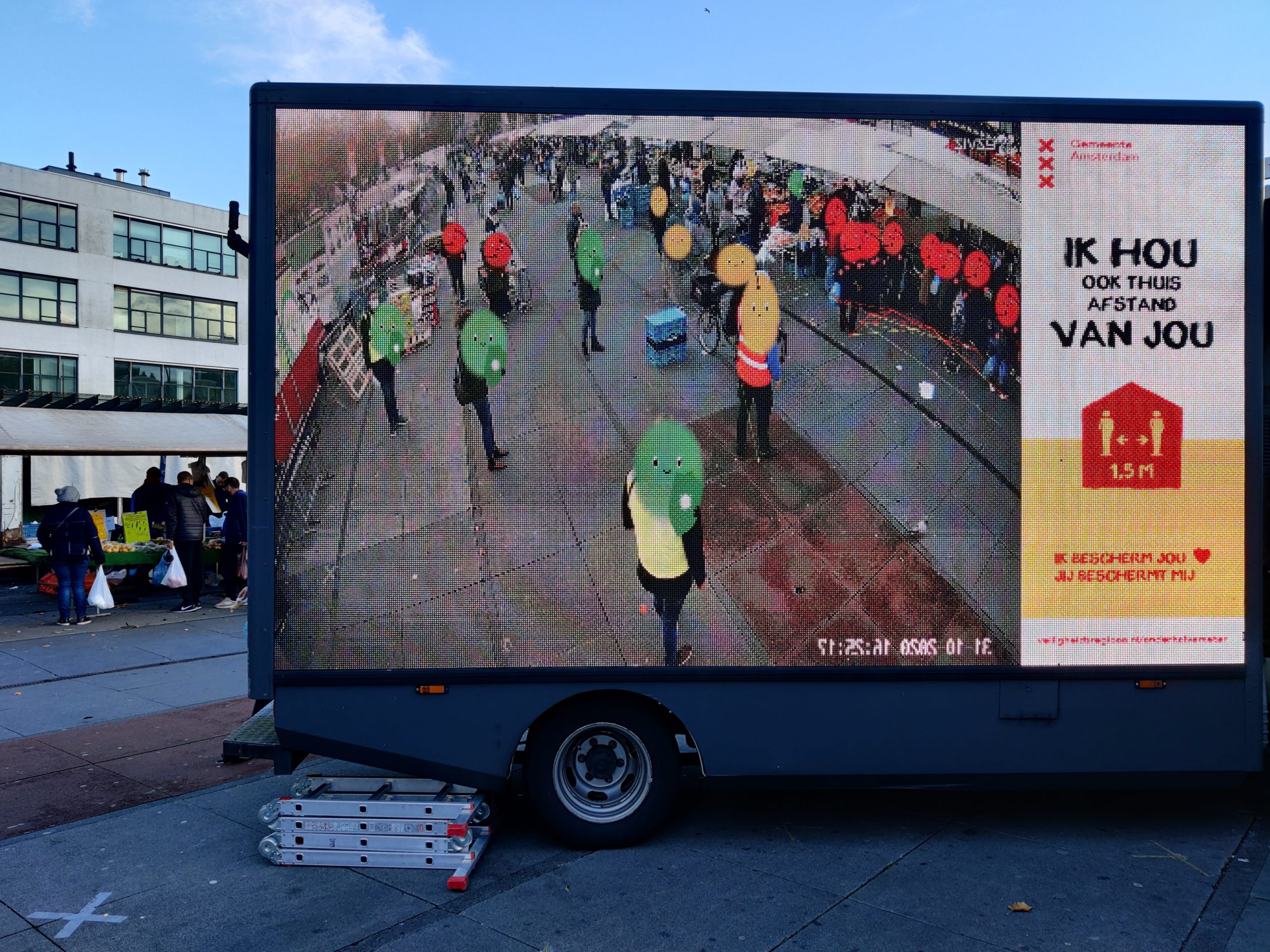 Because of COVID19 measures have been taken to prevent person to person detection, one of the most influential and important new regulation is to keep 1.5 meters distance from each other. To help remind citizens to maintain this distance we have created the 1.5 meter monitor.

The 1.5 meter monitor is a system created to make users aware of social distancing measures. It uses a camera, computer with GPU (or edge devices) and a screen to create awareness for anybody within the field of view of the camera to keep social distance. It does so by displaying a picture that is taken of passersby, that is overlayed with a smiley: a green smiley for more than 1.8 meters distance, an orange smiley for 1.5-1.8 meters distance and a red one for less than 1.5 meters distance. An audio signal can also be played.

The system does not store any visual information, and when detected people will be displayed with a smiley overlay to prevent visual recognition. We do record the number of passers-by within range of the camera, to monitor whether it is too busy in a certain area.

We are using the 1.5 meter monitor temporarily because of the COVID-19 Emergency Ordinance and because of the need to keep a distance of 1.5 meters. The system is being tested in public spaces at a number of locations in the Amsterdam-Amstelland Safety Region.

More detailed information on the system

Here you can get acquainted with the information used by the system, the operating logic, and its governance in the areas that interest you.

Key data sources utilised in the development and use of the system, their content and utilisation methods. The different data sources are separated by subheadings.

Images that are recorded by the camera are not saved in memory of the computer, but are removed. No visual data, only the amount of persons that are on the screen at a given moment, and the distribution of persons in the low risk, high risk and safe zone.

For the creation of the object detection model that is being used, the open dataset COCO (“Common Objects in Context”) has been used. COCO is a large-scale object detection, segmentation, and captioning dataset. It has over 330.000 images, with 250.000 people and 1.5 million objects annotated.

The operational logic of the automatic data processing and reasoning performed by the system and the models used.

YOLO (You Only Look Once), is a network for object detection. The object detection task consists in determining the location on the image where certain objects are present, as well as classifying those objects.

One and a half meter monitor System architecture image 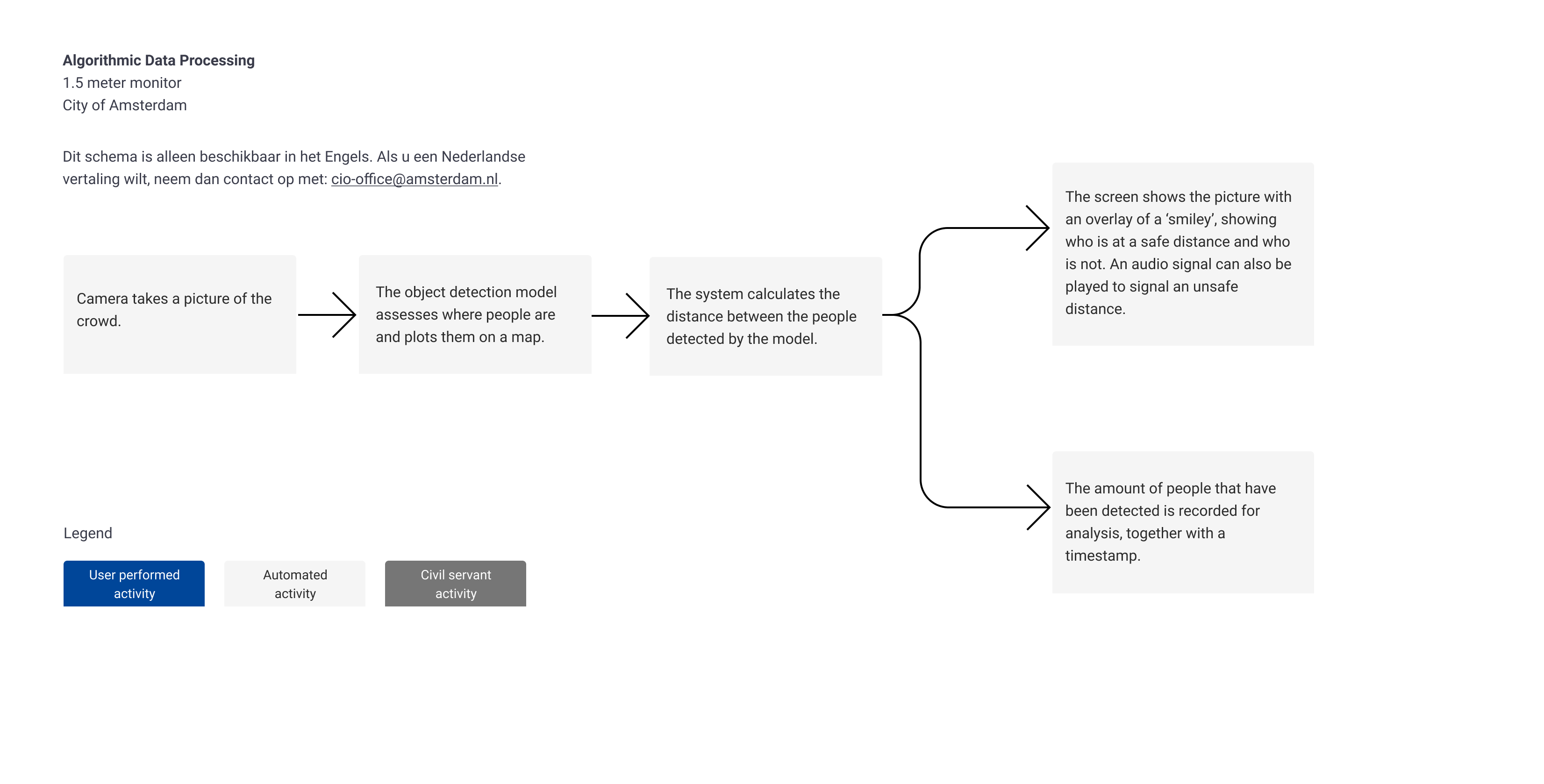 Promotion and realisation of equality in the use of the service.

There could be a bias in the detection of humans. The people used in the open dataset that is used for the creation of the model (COCO, see ‘Data’), might not generalize correctly for all different skin colors, ages, sizes or clothing styles. To measure the effectiveness of the 1.5 meters monitor, qualitative interviews will be conducted.

Human oversight during the use of the service.

No automatic decisions are made, other than the current information about spacing between pedestrians. There is no human oversight for this decision.

Risks related to the system and its use and their management methods.

Was this information useful?

Thanks for your feedback!